Theodore W. Anderson, a statistician whose work brought a new mathematical rigor to economics and social science in the postwar years and helped pave the way for modern econometrics and data analysis, died on Sept. 17 in Stanford, Calif. He was 98.

The cause was heart failure, his son, Robert, said. Professor Anderson, the son of a Minnesota minister, had a distinguished academic career. He studied at Northwestern and Princeton, did research at the University of Chicago and taught at Columbia and, for more than two decades, at Stanford University.

During World War I, at Princeton, he did war research work on long-range weather forecasting, gunfire strategies for battleships and explosives testing. But his signal work began immediately after the war, when he joined pioneering efforts at the University of Chicago to help shape postwar economic policy decisions.

The work involved developing systems of mathematical equations that would reveal underlying structures in the economy. Those systems evolved into econometric models widely used today by the Federal Reserve and other central banks.

Professor Anderson also made advances in the analysis of data in psychology and the social sciences. His talent for reducing complicated systems to their mathematical essence helped him strengthen tools for dealing with the sorts of large data sets common in the social sciences, in which researchers look for patterns within a broad swath of information collected on individuals.

In one instance, in 1961, psychologists applied these methods to data derived from detailed personality questionnaires and concluded that individual personalities could be summed up by an overarching “big five” traits.

Professor Anderson’s contributions lay the groundwork for an advanced analysis of data sets containing not just dozens but thousands of variables. “Among other things, I would say that Ted was a prophet of the big data era,” David Donoho, a professor of statistics at Stanford and a longtime colleague, told the Stanford University news office Professor Anderson’s book “An Introduction to Multivariate Statistical Analysis” (1958) remains a classic in the field, educating generations of statisticians in the conceptual underpinnings of a particularly challenging kind of data analysis.

In multivariate data, many variables are considered simultaneously rather than one at a time. Using this type of analysis in medicine, a person’s health is gauged not just by blood pressure, for example, but by blood pressure in tandem with weight, cholesterol levels and heart rate. Translated into Russian in 1964 and appearing in a third edition in 2003, the book has inspired thousands of technical papers. Michael Perlman, a professor of statistics at the University of Washington, said that the book is remarkable in that it can lead a reader with very little mathematical background through a clear and logical progression of the entire field.

“I believe that science progresses more if the communication is made easier,” Professor Anderson told an interviewer in 1986. “It’s unfair to the reader, as well as the editor, to put out papers which are difficult to read, not because of the difficulty of the material but because of the sloppiness of the work and the carelessness in exposition.”

He also brought mathematical rigor to the study of sets of measurements taken over time — of unemployment numbers, for example, which depend strongly on the previous year’s numbers, which in turn depend on those of the year before. In the 1960s, economists were struggling with these mathematically complex “time series,” which were vital for capturing the dynamic nature of the economy.

Professor Anderson’s work, including his book “The Statistical Analysis of Time Series” (1971), was at the forefront of this new field, John Taylor, an economics professor at Stanford and a former doctoral student of Professor Anderson’s, said in an interview.

Time series analyses are now “very commonplace in economics,” he said, “and Ted’s work helped move that forward.” Professor Anderson’s early interest in economics and social science applications stemmed from his goal of “doing some good,” he said in the 1986 interview. “While I find intellectual interest in mathematical statistical problems,” he said, “I think a final objective is to have an effect on analyzing data and decision making under uncertainty.”

Theodore Wilbur Anderson was born in Minneapolis on June 5, 1918, the oldest of three children of Theodore Anderson Sr., a minister and educator, and the former Evelynn Johnson. He was inspired by a high school teacher to study chemistry, first at North Park College in Chicago and then at Northwestern University in Evanston, Ill., until he realized he was, as he later said, “terrible in the laboratory.”

He switched to mathematics and took all his required math courses in one year, graduating in 1939. He then worked with Samuel Wilks, a leading mathematical statistician, at Princeton, where he obtained both a master’s and a Ph.D. in mathematics.

At Princeton he was exposed to the application of mathematics and statistics to other fields, including the military. His war research work on weather forecasting and armaments was done under the auspices of the Applied Mathematics Panel of the National Defense Research Committee. At Princeton he came under the influence of leading statisticians like

William Cochran, Will Dixon, John Tukey and Charles Winsor and took mathematical economics seminars with Oskar Morgenstern, who was at the time writing a book with John von Neumann on game theory and economic behavior. After leaving Princeton in 1945 he joined the Cowles Commission for Research in Economics at the University of Chicago, which was suffused, he said, by an “almost missionary zeal” to develop new approaches to economics through probability, statistics and mathematics. He worked with top scholars, many of whom would later receive the Nobel in economic science, among them Lawrence Klein, Leo Hurwicz and Tjalling Koopmans.

At Cowles he worked on tricky systems of economic equations that attempted to disentangle cause and effect by considering several related factors simultaneously. Cowles researchers used these systems, for example, to analyze the postwar agricultural economy by looking at consumers’ demand for food, household incomes and available food supply from farmers.

After a year in Chicago, Professor Anderson was enticed by the mathematician Abraham Wald to join the faculty in the new department of mathematical statistics at Columbia. He remained there until 1967, when he moved with his family to Stanford for a joint appointment in statistics and economics.

Besides his son, Professor Anderson’s survivors include his wife, the former Dorothy Fisher, whom he met at the University of Chicago; two daughters, Janet Anderson Yang and Jeanne Anderson; and five grandchildren.

Although he retired from classroom duties in 1988, Professor Anderson continued to give talks, attend seminars and do research from his home office. He recently submitted a technical paper and, just days before his death, was responding to peer reviewers’ comments.

His son recalled him saying, “Well, they’re wrong, but that is a good idea for a follow-up paper.” 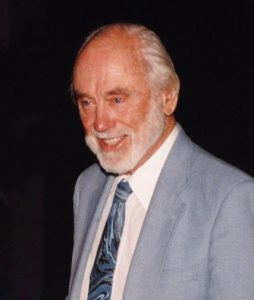